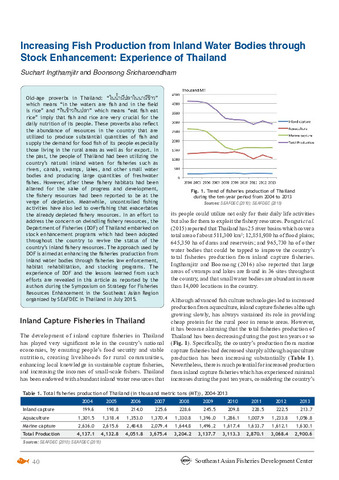 Old-age proverbs in Thailand: “ในนํ้ามีปลาในนามีข้าว” which means “in the waters are fish and in the field is rice” and “กินข้าวกินปลา” which means “eat fish eat rice” imply that fish and rice are very crucial for the daily nutrition of its people. These proverbs also reflect the abundance of resources in the country that are utilized to produce substantial quantities of fish and supply the demand for food fish of its people especially those living in the rural areas as well as for export. In the past, the people of Thailand had been utilizing the country’s natural inland waters for fisheries such as rivers, canals, swamps, lakes, and other small water bodies and producing large quantities of freshwater fishes. However, after these fishery habitats had been altered for the sake of progress and development, the fishery resources had been reported to be at the verge of depletion. Meanwhile, uncontrolled fishing activities have also led to overfishing that exacerbates the already depleted fishery resources. In an effort to address the concern on dwindling fishery resources, the Department of Fisheries (DOF) of Thailand embarked on stock enhancement programs which had been adopted throughout the country to revive the status of the country’s inland fishery resources. The approach used by DOF is aimed at enhancing the fisheries production from inland water bodies through fisheries law enforcement, habitat rehabilitation, and stocking programs. The experience of DOF and the lessons learned from such efforts are revealed in this article as reported by the authors during the Symposium on Strategy for Fisheries Resources Enhancement in the Southeast Asian Region organized by SEAFDEC in Thailand in July 2015.