Monitoring and identification of harmful algal blooms in Southeast Asia to support SDG 14.1 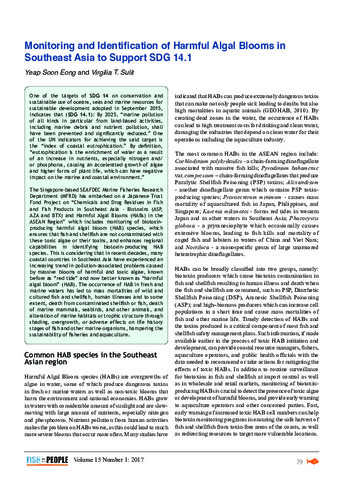 One of the targets of SDG 14 on conservation and sustainable use of oceans, seas and marine resources for sustainable development adopted in September 2015, indicates that (SDG 14.1): By 2025, ‘marine pollution of all kinds in particular from land-based activities, including marine debris and nutrient pollution, shall have been prevented and significantly reduced.’ One of the UN indicators for achieving the said target is the ‘index of coastal eutrophication.’ By definition, ‘eutrophication is the enrichment of water as a result of an increase in nutrients, especially nitrogen and/or phosphorus, causing an accelerated growth of algae and higher forms of plant life, which can have negative impact on the marine and coastal environment.’ The Singapore-based SEAFDEC Marine Fisheries Research Department (MFRD) has embarked on a Japanese Trust Fund Project on ‘Chemicals and Drug Residues in Fish and Fish Products in Southeast Asia – Biotoxins (ASP, AZA and BTX) and Harmful Algal Blooms (HABs) in the ASEAN Region’ which includes monitoring of biotoxin-producing harmful algal bloom (HAB) species, which ensures that fish and shellfish are not contaminated with these toxic algae or their toxins, and enhances regional capabilities in identifying biotoxin-producing HAB species. This is considering that in recent decades, many coastal countries in Southeast Asia have experienced an increasing trend in pollution-associated problems caused by massive blooms of harmful and toxic algae, known before as ‘red tide’ and now better known as ‘harmful algal bloom’ (HAB). The occurrence of HAB in fresh and marine waters has led to mass mortalities of wild and cultured fish and shellfish, human illnesses and to some extent, death from contaminated shellfish or fish, death of marine mammals, seabirds, and other animals, and alteration of marine habitats or trophic structure through shading, overgrowth, or adverse effects on life history stages of fish and other marine organisms, hampering the sustainability of fisheries and aquaculture.