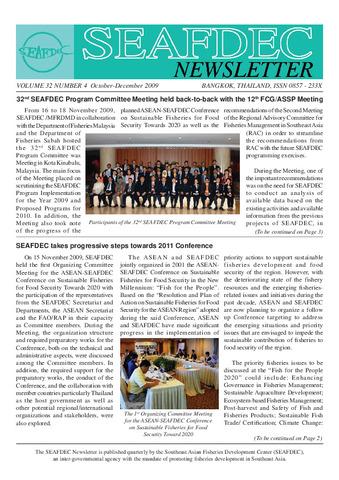 During this quarter, SEAFDEC organized the 32nd SEAFDEC Program Committee Meeting held back to-back with the 12th FCG/ASSP Meeting, of which the focus was placed on scrutinizing the SEAFDEC programs implemented during the Year 2009 as well as those planned for 2010. Considering the close linkages between the issues under discussion by the Regional Advisory Committee for Fisheries Management in Southeast Asia (RAC) with the future SEAFDEC programming exercises, the recommendations from the 2nd RAC Meeting was also shared with the Program Committee. SEAFDEC also organized the First Meeting of the Andaman Sea Sub-region, where discussions were made on the initiatives in ensuring long-term sustainable management of fisheries in the sub-region, i.e. management of fishing capacity, combating IUU fishing, and vessel registration, among others. In addition, as SEAFDEC is planning to organize the ASEAN-SEAFDEC Conference “Fish for the People 2020” in June 2011, several preparatory processes are being undertaken by SEAFDEC were also discussed. These include consultations and discussions convened by Committee/Sub-Committees established for the Conference, as well as technical consultations that are envisaged to form the technical fundamentals for the Conference. It is also planned that the Press Conference for the Conference would be convened in the coming January 2010 to offi cially announce the Conference.