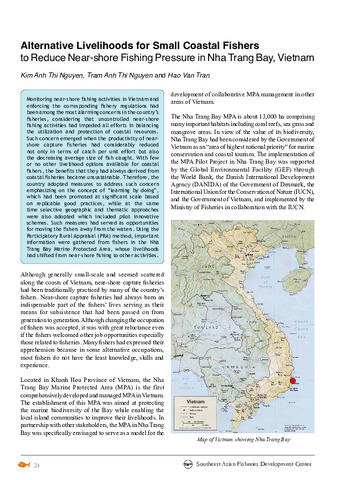 Monitoring near-shore fishing activities in Viet Nam and enforcing the corresponding fishery regulations had been among the most alarming concerns in the country’s fisheries, considering that uncontrolled near-shore fishing activities had impeded all efforts in balancing the utilization and protection of coastal resources. Such concern emerged when the productivity of nearshore capture fisheries had considerably reduced not only in terms of catch per unit effort but also the decreasing average size of fish caught. With few or no other livelihood options available for coastal fishers, the benefits that they had always derived from coastal fisheries became unsustainable. Therefore, the country adopted measures to address such concern emphasizing on the concept of “learning by doing”, which had been promoted at significant scale based on replicable good practices, while at the same time selective geographic and thematic approaches were also adopted which included pilot innovative schemes. Such measures had served as opportunities for moving the fishers away from the waters. Using the Participatory Rural Appraisal (PRA) method, important information were gathered from fishers in the Nha Trang Bay Marine Protected Area, whose livelihoods had shifted from near-shore fishing to other activities.