The shifting habitat of Hilsa: River to sea 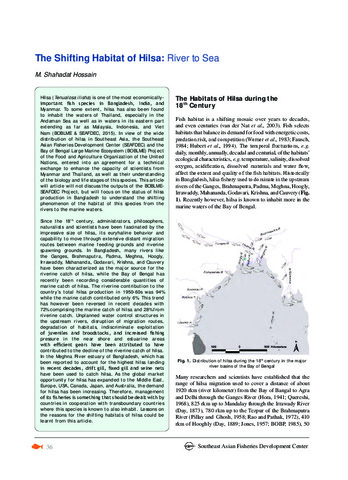 Hilsa (Tenualosa ilisha) is one of the most economically important fish species in Bangladesh, India, and Myanmar. To some extent, hilsa has also been found to inhabit the waters of Thailand, especially in the Andaman Sea as well as in waters in its eastern part extending as far as Malaysia, Indonesia, and Viet Nam (BOBLME & SEAFDEC, 2015). In view of the wide distribution of hilsa in Southeast Asia, the Southeast Asian Fisheries Development Center (SEAFDEC) and the Bay of Bengal Large Marine Ecosystem (BOBLME) Project of the Food and Agriculture Organization of the United Nations, entered into an agreement for a technical exchange to enhance the capacity of scientists from Myanmar and Thailand, as well as their understanding of the biology and life stages of this species. This article will article will not discuss the outputs of the BOBLMESEAFDEC Project, but will focus on the status of hilsa production in Bangladesh to understand the shifting phenomenon of the habitat of this species from the rivers to the marine waters. Since the 18th century, administrators, philosophers, naturalists and scientists have been fascinated by the impressive size of hilsa, its euryhaline behavior and capability to move through extensive distant migration routes between marine feeding grounds and riverine spawning grounds. In Bangladesh, many rivers like the Ganges, Brahmaputra, Padma, Meghna, Hoogly, Irrawaddy, Mahananda, Godavari, Krishna, and Cauvery have been characterized as the major source for the riverine catch of hilsa, while the Bay of Bengal has recently been recording considerable quantities of marine catch of hilsa. The riverine contribution to the country’s total hilsa production in 1950-60s was 94% while the marine catch contributed only 6%. This trend has however been reversed in recent decades with 72% comprising the marine catch of hilsa and 28% from riverine catch. Unplanned water control structures in the upstream rivers, disruption of migration routes, degradation of habitats, indiscriminate exploitation of juveniles and broodstocks, and increased fishing pressure in the near shore and estuarine areas with efficient gears have been attributed to have contributed to the decline of the riverine catch of hilsa. In the Meghna River estuary of Bangladesh, which has been reported to account for the highest hilsa landing in recent decades, drift gill, fixed gill and seine nets have been used to catch hilsa. As the global market opportunity for hilsa has expanded to the Middle East, Europe, USA, Canada, Japan, and Australia, the demand for hilsa has been increasing. Therefore, management of its fisheries is something that should be dealt with by countries in cooperation with transboundary countries where this species is known to also inhabit. Lessons on the reasons for the shifting habitats of hilsa could be learnt from this article.