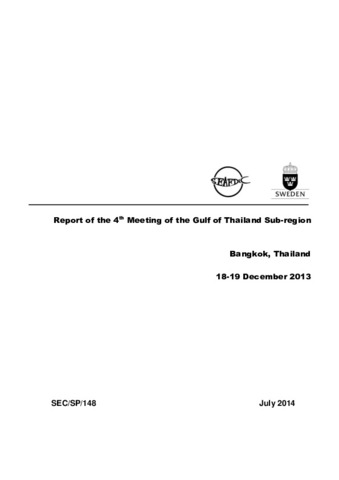 The 4th Meeting of the Gulf of Thailand Sub-region was convened in Bangkok, Thailand from 18 to 19 December 2013. The Meeting served as a process to move from initiation to commitment on a more concrete action as recommended during the 3rd Meeting of the Gulf of Thailand Sub-region in 2011. Discussions were organized to allow for parallel meetings among neighboring countries on specific subject matters, such as the status of Rastrelliger spp., port monitoring, and national initiatives to eliminate illegal and destructive fishing. Establishment of working groups/task forces on priority areas common to the sub-region’s fisheries such as capacity/monitoring of fishing efforts; monitoring and capacity-building at ports and landing sites; and options for joint approaches to conserve the Indo-Pacific mackerel (pla too) and related species, was also one of the main objectives of the Meeting. On the whole, the Meeting was aimed at identifying the suitable actions for continued work at the sub-regional level.