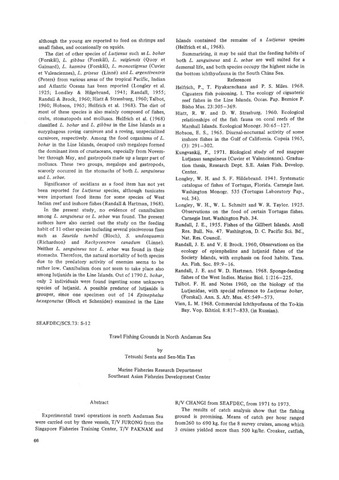 Experimental trawl operations in north Andaman Sea were carried out by three vessels, T/V JURONG from the Singapore Fisheries Training Center, T/V PAKNAM and R/V CHANGI from SEAFDEC, from 1971 to 1973.The results of catch analysis show that the fishing ground is promising. Means of catch per hour ranged from 260 to 690 kg. for the 8 survey cruises, among which 3 cruises yielded more than 500 kg/hr. Croaker, catfish, jacks and scad, shad, golden snapper, grunter and white pomfret usually constituted about 70% of total catch. However, catch per hour and species composition varied, sometimes extremely, from haul to haul, suggesting patchy distributions of fish schools.Good fishing grounds were usually found in shallow waters of 30—40 metres deep, and means of catch per hour decreased with depth. Nevertheless the mean of catch per hour in the deepest waters surveyed (60—80 metres) was at the same level as those observed in the good fishing grounds in the South China Sea. On the other hand, fluctuation of catch per hour was much higher in shallow waters than in deeper waters.