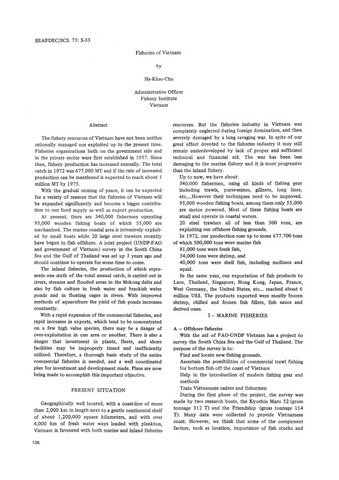 The fishery resources of Vietnam have not been neither rationally managed nor exploited up to the present time. Fisheries organizations both on the government side and in the private sector were first established in 1957. Since then, fishery production has increased annually. The total catch in 1972 was 677.000 MT and if the rate of increased production can be mentioned is expected to reach about 1 million MT by 1975.With the gradual coming of peace, it can be expected for a variety of reasons that the fisheries of Vietnam will be expanded significantly and become a bigger contribution to our food supply as well as export production.At present, there are 340,000 fishermen operating 95,000 wooden fishing boats of which 55,000 are mechanized. The marine coastal area is intensively exploited by small boats while 20 large steel trawlers recently have begun to fish offshore. A joint project (UNDP-FAO and government of Vietnam) survey in the South China Sea and the Gulf of Thailand was set up 3 years ago and should continue to operate for some time to come.The inland fisheries, the production of which represents one sixth of the total annual catch, is carried out in rivers, streams and flooded areas in the Mekong delta and also by fish culture in fresh water and brackish water ponds and in floating cages in rivers. With improved methods of aquaculture the yield of fish ponds increases constantly.With a rapid expansion of the commercial fisheries, and rapid increases in exports, which tend to be concentrated on a few high value species, there may be a danger of over-exploitation in one area or another. There is also a danger that investment in plants, fleets, and shore facilities may be improperly timed and inefficiently utilized. Therefore, a thorough basic study of the entire commercial fisheries is needed, and a well coordinated plan for investment and development made. Plans are now being made to accomplish this important objective.