Managing the spread of invasive apple snails and possible utilization in aquaculture: A case in Myanmar 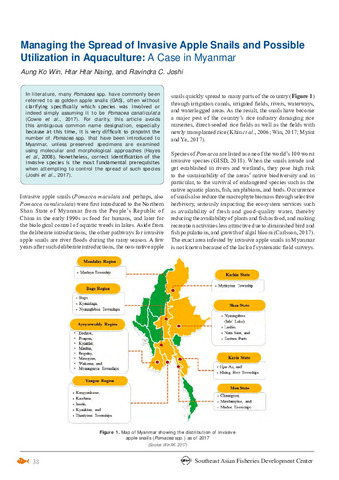 In literature, many Pomacea spp. have commonly been referred to as golden apple snails (GAS), often without clarifying specifically which species was involved or indeed simply assuming it to be Pomacea canaliculata (Cowie et al., 2017). For clarity, this article avoids this ambiguous common name designation, especially because at this time, it is very difficult to pinpoint the number of Pomacea spp. that have been introduced to Myanmar, unless preserved specimens are examined using molecular and morphological approaches (Hayes et al, 2008). Nonetheless, correct identification of the invasive species is the most fundamental prerequisites when attempting to control the spread of such species (Joshi et al., 2017).