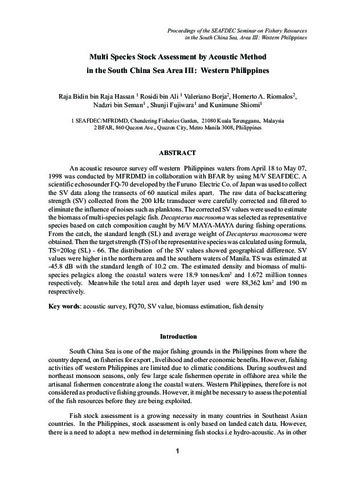 An acoustic resource survey off western Philippines waters from April 18 to May 07, 1998 was conducted by MFRDMD in collaboration with BFAR by using M/V SEAFDEC. A scientific echosounder FQ-70 developed by the Furuno Electric Co. of Japan was used to collect the SV data along the transects of 60 nautical miles apart. The raw data of backscattering strength (SV) collected from the 200 kHz transducer were carefully corrected and filtered to eliminate the influence of noises such as planktons. The corrected SV values were used to estimate the biomass of multi-species pelagic fish. Decapterus macrosoma was selected as representative species based on catch composition caught by M/V MAYA-MAYA during fishing operations. From the catch, the standard length (SL) and average weight of Decapterus macrosoma were obtained. Then the target strength (TS) of the representative species was calculated using formula, TS=20log (SL) - 66. The distribution of the SV values showed geographical difference. SV values were higher in the northern area and the southern waters of Manila. TS was estimated at -45.8 dB with the standard length of 10.2 cm. The estimated density and biomass of multispecies pelagics along the coastal waters were 18.9 tonnes/km2 and 1.672 million tonnes respectively. Meanwhile the total area and depth layer used were 88,362 km2 and 190 m resprectively.