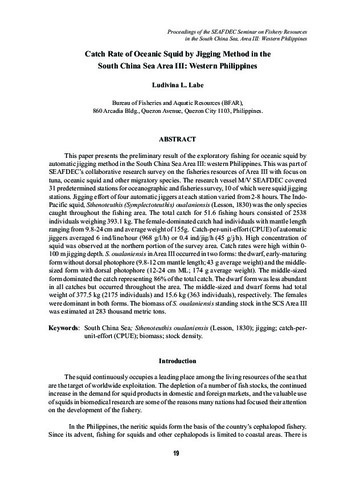 This paper presents the preliminary result of the exploratory fishing for oceanic squid by automatic jigging method in the South China Sea Area III: western Philippines. This was part of SEAFDEC’s collaborative research survey on the fisheries resources of Area III with focus on tuna, oceanic squid and other migratory species. The research vessel M/V SEAFDEC covered 31 predetermined stations for oceanographic and fisheries survey, 10 of which were squid jigging stations. Jigging effort of four automatic jiggers at each station varied from 2-8 hours. The Indo-Pacific squid, Sthenoteuthis (Symplectoteuthis) oualaniensis (Lesson, 1830) was the only species caught throughout the fishing area. The total catch for 51.6 fishing hours consisted of 2538 individuals weighing 393.1 kg. The female-dominated catch had individuals with mantle length ranging from 9.8-24 cm and average weight of 155g. Catch-per-unit-effort (CPUE) of automatic jiggers averaged 6 ind/line/hour (968 g/l/h) or 0.4 ind/jig/h (45 g/j/h). High concentration of squid was observed at the northern portion of the survey area. Catch rates were high within 0-100 m jigging depth. S. oualaniensis in Area III occurred in two forms: the dwarf, early-maturing form without dorsal photophore (9.8-12 cm mantle length; 43 g average weight) and the middle-sized form with dorsal photophore (12-24 cm ML; 174 g average weight). The middle-sized form dominated the catch representing 86% of the total catch. The dwarf form was less abundant in all catches but occurred throughout the area. The middle-sized and dwarf forms had total weight of 377.5 kg (2175 individuals) and 15.6 kg (363 individuals), respectively. The females were dominant in both forms. The biomass of S. oualaniensis standing stock in the SCS Area III was estimated at 283 thousand metric tons.