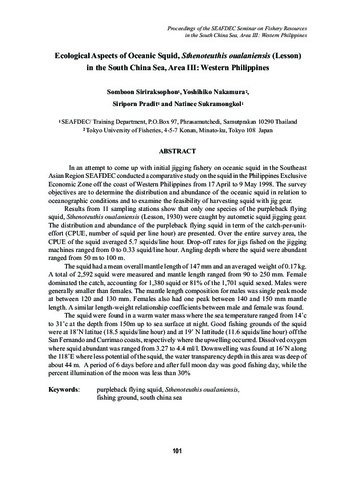 In an attempt to come up with initial jigging fishery on oceanic squid in the Southeast Asian Region SEAFDEC conducted a comparative study on the squid in the Philippines Exclusive Economic Zone off the coast of Western Philippines from 17 April to 9 May 1998. The survey objectives are to determine the distribution and abundance of the oceanic squid in relation to oceanographic conditions and to examine the feasibility of harvesting squid with jig gear.Results from 11 sampling stations show that only one species of the purpleback flying squid, Sthenoteuthis oualaniensis (Lesson, 1930) were caught by autometic squid jigging gear. The distribution and abundance of the purpleback flying squid in term of the catch-per-uniteffort (CPUE, number of squid per line hour) are presented. Over the entire survey area, the CPUE of the squid averaged 5.7 squids/line hour. Drop-off rates for jigs fished on the jigging machines ranged from 0 to 0.33 squid/line hour. Angling depth where the squid were abundant ranged from 50 m to 100 m.The squid had a mean overall mantle length of 147 mm and an averaged weight of 0.17 kg. A total of 2,592 squid were measured and mantle length ranged from 90 to 250 mm. Female dominated the catch, accounting for 1,380 squid or 81% of the 1,701 squid sexed. Males were generally smaller than females. The mantle length composition for males was single peak mode at between 120 and 130 mm. Females also had one peak between 140 and 150 mm mantle length. A similar length-weight relationship coefficients between male and female was found.The squid were found in a warm water mass where the sea temperature ranged from 14°C to 31°C at the depth from 150m up to sea surface at night. Good fishing grounds of the squid were at 18°N latitue (18.5 squids/line hour) and at 19°N lattitude (11.6 squids/line hour) off the San Fernando and Currimao coasts, respectively where the upwelling occurred. Dissolved oxygen where squid abundant was ranged from 3.27 to 4.4 ml/l. Downwelling was found at 16°N along the 118°E where less potential of the squid, the water transparency depth in this area was deep of about 44 m. A period of 6 days before and after full moon day was good fishing day, while the percent illumination of the moon was less than 30%.