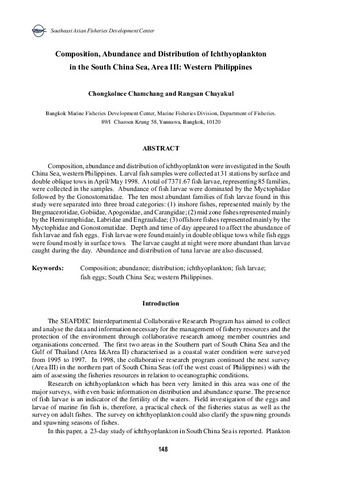 Composition, abundance and distribution of ichthyoplankton were investigated in the South China Sea, western Philippines. Larval fish samples were collected at 31 stations by surface and double oblique tows in April/May 1998. A total of 7371.67 fish larvae, representing 85 families, were collected in the samples. Abundance of fish larvae were dominated by the Myctophidae followed by the Gonostomatidae. The ten most abundant families of fish larvae found in this study were separated into three broad categories: (1) inshore fishes, represented mainly by the Bregmacerotidae, Gobiidae, Apogonidae, and Carangidae; (2) mid zone fishes represented mainly by the Hemiramphidae, Labridae and Engraulidae; (3) offshore fishes represented mainly by the Myctophidae and Gonostomatidae. Depth and time of day appeared to affect the abundance of fish larvae and fish eggs. Fish larvae were found mainly in double oblique tows while fish eggs were found mostly in surface tows. The larvae caught at night were more abundant than larvae caught during the day. Abundance and distribution of tuna larvae are also discussed.