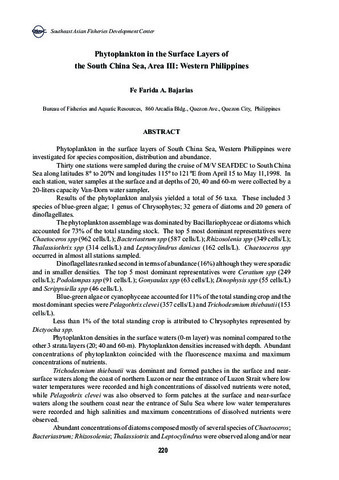 Phytoplankton in the surface layers of South China Sea, Western Philippines were investigated for species composition, distribution and abundance.Thirty one stations were sampled during the cruise of M/V SEAFDEC to South China Sea along latitudes 8° to 20°N and longitudes 115° to 121°E from April 15 to May 11,1998. In each station, water samples at the surface and at depths of 20, 40 and 60-m were collected by a 20-liters capacity Van-Dorn water sampler.Results of the phytoplankton analysis yielded a total of 56 taxa. These included 3 species of blue-green algae; 1 genus of Chrysophytes; 32 genera of diatoms and 20 genera of dinoflagellates.The phytoplankton assemblage was dominated by Bacillariophyceae or diatoms which accounted for 73% of the total standing stock. The top 5 most dominant representatives were Chaetoceros spp (962 cells/L); Bacteriastrum spp (587 cells/L); Rhizosolenia spp (349 cells/L); Thalassiothrix spp (314 cells/L) and Leptocylindrus danicus (162 cells/L). Chaetoceros spp occurred in almost all stations sampled.Dinoflagellates ranked second in terms of abundance (16%) although they were sporadic and in smaller densities. The top 5 most dominant representatives were Ceratium spp (249 cells/L); Podolampas spp (91 cells/L); Gonyaulax spp (63 cells/L); Dinophysis spp (55 cells/L) and Scrippsiella spp (46 cells/L).Blue-green algae or cyanophyceae accounted for 11% of the total standing crop and the most dominant species were Pelagothrix clevei (357 cells/L) and Trichodesmium thiebautii (153 cells/L).Less than 1% of the total standing crop is attributed to Chrysophytes represented by Dictyocha spp.Phytoplankton densities in the surface waters (0-m layer) was nominal compared to the other 3 strata/layers (20; 40 and 60-m). Phytoplankton densities increased with depth. Abundant concentrations of phytoplankton coincided with the fluorescence maxima and maximum concentrations of nutrients.Trichodesmium thiebautii was dominant and formed patches in the surface and nearsurface waters along the coast of northern Luzon or near the entrance of Luzon Strait where low water temperatures were recorded and high concentrations of dissolved nutrients were noted, while Pelagothrix clevei was also observed to form patches at the surface and near-surface waters along the southern coast near the entrance of Sulu Sea where low water temperatures were recorded and high salinities and maximum concentrations of dissolved nutrients were observed.Abundant concentrations of diatoms composed mostly of several species of Chaetoceros; Bacteriastrum; Rhizosolenia; Thalassiotrix and Leptocylindrus were observed along and/or near the coastlines, while in stations offshore, minimal density was noted.Several species of dinoflagellates in low densities were observed in stations going offshore.The paper closes with a brief discussion of the general distribution pattern exhibited by the phytoplankton.