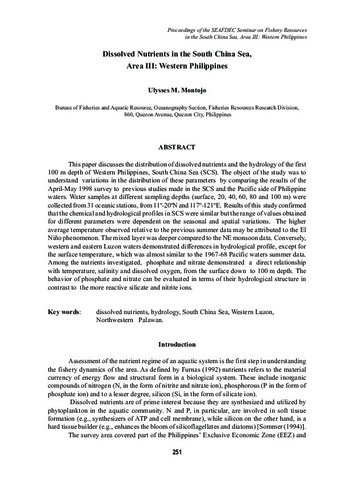 This paper discusses the distribution of dissolved nutrients and the hydrology of the first 100 m depth of Western Philippines, South China Sea (SCS). The object of the study was to understand variations in the distribution of these parameters by comparing the results of the April-May 1998 survey to previous studies made in the SCS and the Pacific side of Philippine waters. Water samples at different sampling depths (surface, 20, 40, 60, 80 and 100 m) were collected from 31 oceanic stations, from 11°-20°N and 117°-121°E. Results of this study confirmed that the chemical and hydrological profiles in SCS were similar but the range of values obtained for different parameters were dependent on the seasonal and spatial variations. The higher average temperature observed relative to the previous summer data may be attributed to the El Nino phenomenon. The mixed layer was deeper compared to the NE monsoon data. Conversely, western and eastern Luzon waters demonstrated differences in hydrological profile, except for the surface temperature, which was almost similar to the 1967-68 Pacific waters summer data. Among the nutrients investigated, phosphate and nitrate demonstrated a direct relationship with temperature, salinity and dissolved oxygen, from the surface down to 100 m depth. The behavior of phosphate and nitrate can be evaluated in terms of their hydrological structure in contrast to the more reactive silicate and nitrite ions.