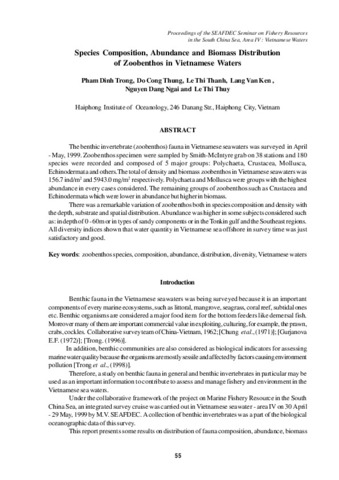 The benthic invertebrate (zoobenthos) fauna in Vietnamese seawaters was surveyed in April - May, 1999. Zoobenthos specimen were sampled by Smith-McIntyre grab on 38 stations and 180 species were recorded and composed of 5 major groups: Polychaeta, Crustacea, Mollusca, Echinodermata and others.The total of density and biomass zoobenthos in Vietnamese seawaters was 156.7 ind/m2 and 5943.0 mg/m2 respectively. Polychaeta and Mollusca were groups with the highest abundance in every cases considered. The remaining groups of zoobenthos such as Crustacea and Echinodermata which were lower in abundance but higher in biomass.There was a remarkable variation of zoobenthos both in species composition and density with the depth, substrate and spatial distribution. Abundance was higher in some subjects considered such as: in depth of 0 - 60m or in types of sandy components or in the Tonkin gulf and the Southeast regions. All diversity indices shown that water quantity in Vietnamese sea offshore in survey time was just satisfactory and good.