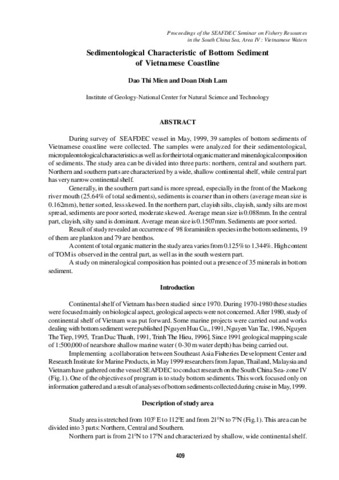 During survey of SEAFDEC vessel in May, 1999, 39 samples of bottom sediments of Vietnamese coastline were collected. The samples were analyzed for their sedimentological, micropaleontological characteristics as well as for their total organic matter and mineralogical composition of sediments. The study area can be divided into three parts: northern, central and southern part. Northern and southern parts are characterized by a wide, shallow continental shelf, while central part has very narrow continental shelf.Generally, in the southern part sand is more spread, especially in the front of the Maekong river mouth (25.64% of total sediments), sediments is coarser than in others (average mean size is 0.162mm), better sorted, less skewed. In the northern part, clayish silts, clayish, sandy silts are most spread, sediments are poor sorted, moderate skewed. Average mean size is 0.088mm. In the central part, clayish, silty sand is dominant. Average mean size is 0.1507mm. Sediments are poor sorted.Result of study revealed an occurrence of 98 foraminifers species in the bottom sediments, 19 of them are plankton and 79 are benthos.A content of total organic matter in the study area varies from 0.125% to 1.344%. High content of TOM is observed in the central part, as well as in the south western part.A study on mineralogical composition has pointed out a presence of 35 minerals in bottom sediment.