Application of molecular techniques for sustainable management of inland fisheries: The experience of Indonesia 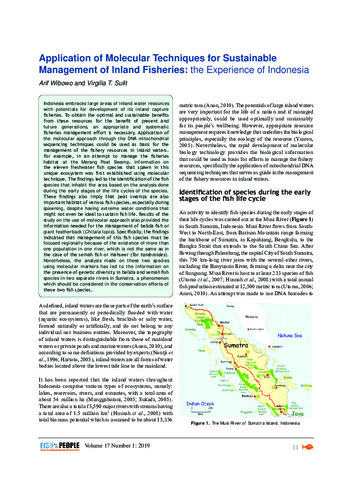 Indonesia embraces large areas of inland water resources with potentials for development of its inland capture fisheries. To obtain the optimal and sustainable benefits from these resources for the benefit of present and future generations, an appropriate and systematic fisheries management effort is necessary. Application of the molecular approach through the DNA mitochondrial sequencing techniques could be used as basis for the management of the fishery resources in inland waters. For example, in an attempt to manage the fisheries habitat at the Merang Peat Swamp, information on the eleven freshwater fish species that spawn in this unique ecosystem was first established using molecular technique. The findings led to the identification of the fish species that inhabit the area based on the analysis done during the early stages of the life cycles of the species. These findings also imply that peat swamps are also important habitat of various fish species, especially during spawning, despite having extreme water conditions that might not even be ideal to sustain fish life. Results of the study on the use of molecular approach also provided the information needed for the management of belida fish or giant featherback (Chitala lopis). Specifically, the findings indicated that management of this fish species must be focused regionally because of the existence of more than one population in one river, which is not the same as in the case of the semah fish or mahseer (Tor tambroides). Nonetheless, the analysis made on these two species using molecular markers has led to the information on the presence of genetic diversity in belida and semah fish species in two separate rivers in Sumatra, a phenomenon which should be considered in the conservation efforts of these two fish species.