Re-establishing the sea cucumber resources in the Philippines: The Masinloc experience 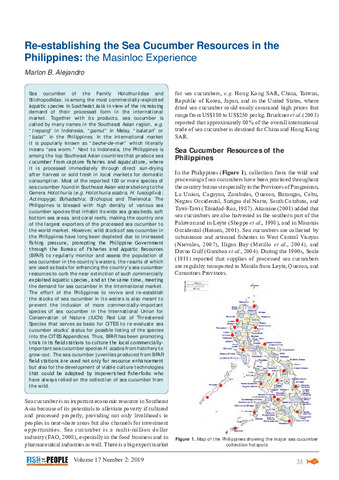 Sea cucumber of the Family Holothuriidae and Stichopodidae, is among the most commercially-exploited aquatic species in Southeast Asia in view of the increasing demand of their processed form in the international market. Together with its products, sea cucumber is called by many names in the Southeast Asian region, e.g. “trepang” in Indonesia, “gamut” in Malay, “balatan” or “balat” in the Philippines. In the international market it is popularly known as “beche-de-mer” which literally means “sea worm.” Next to Indonesia, the Philippines is among the top Southeast Asian countries that produce sea cucumber from capture fisheries and aquaculture, where it is processed immediately through direct sun-drying after harvest or sold fresh in local markets for domestic consumption. Most of the reported 100 or more species of sea cucumber found in Southeast Asian waters belong to the Genera Holothuria (e.g. Holothuria scabra, H. fuscogilva); Actinopyga; Bohadschia; Stichopus; and Thelenota. The Philippines is blessed with high density of various sea cucumber species that inhabit its wide sea grass beds, soft bottom sea areas, and coral reefs, making the country one of the largest exporters of the processed sea cucumber to the world market. However, wild stocks of sea cucumber in the Philippines have long been depleted due to increased fishing pressure, prompting the Philippine Government through the Bureau of Fisheries and Aquatic Resources (BFAR) to regularly monitor and assess the population of sea cucumber in the country’s waters, the results of which are used as basis for enhancing the country’s sea cucumber resources to curb the near extinction of such commercially exploited aquatic species, and at the same time, meeting the demand for sea cucumber in the international market. The effort of the Philippines to revive and re-establish the stocks of sea cucumber in its waters is also meant to prevent the inclusion of more commercially-important species of sea cucumber in the International Union for Conservation of Nature (IUCN) Red List of Threatened Species that serves as basis for CITES to re-evaluate sea cucumber stocks’ status for possible listing of the species into the CITES Appendices. Thus, BFAR has been promoting trials in its field stations to culture the local commercially important sea cucumber species H. scabra from hatchery to grow-out. The sea cucumber juveniles produced from BFAR field stations are used not only for resource enhancement but also for the development of viable culture technologies that could be adapted by impoverished fisherfolks who have always relied on the collection of sea cucumber from the wild.