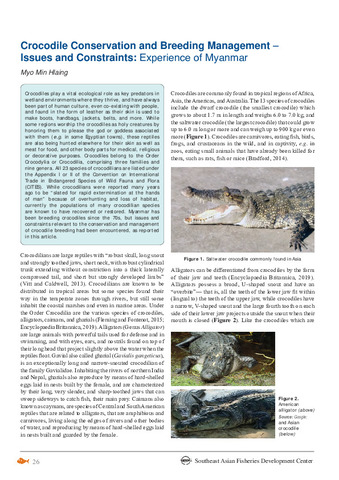 Crocodiles play a vital ecological role as key predators in wetland environments where they thrive, and have always been part of human culture, even co-existing with people, and found in the form of leather as their skin is used to make boots, handbags, jackets, belts, and more. While some regions worship the crocodiles as holy creatures by honoring them to please the god or goddess associated with them (e.g. in some Egyptian towns), these reptiles are also being hunted elsewhere for their skin as well as meat for food, and other body parts for medical, religious or decorative purposes. Crocodiles belong to the Order Crocodylia or Crocodilia, comprising three families and nine genera. All 23 species of crocodilians are listed under the Appendix I or II of the Convention on International Trade in Endangered Species of Wild Fauna and Flora (CITES). While crocodilians were reported many years ago to be “slated for rapid extermination at the hands of man” because of overhunting and loss of habitat, currently the populations of many crocodilian species are known to have recovered or restored. Myanmar has been breeding crocodiles since the 70s, but issues and constraints relevant to the conservation and management of crocodile breeding had been encountered, as reported in this article.