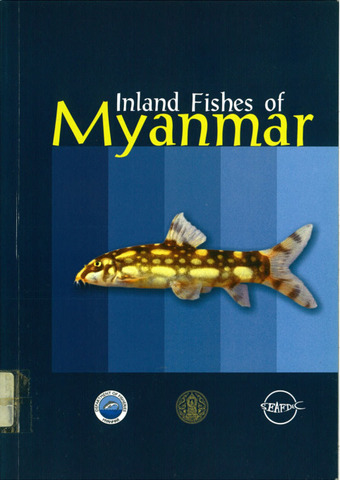 This handbook of some inland fishes in Myanmar was based on a rapid field survey of SEAFDEC supported team and long term observation of the authors on common species and some taxa, obtained from the aquarium trade. We provided brief diagnostic characters and size attain, some known biology and distribution in river basin base, including its fisheries. The species account is ordered by systematic classification. The rapid survey was carried out during December 2002 visit to 3 fishing grounds, 4 landing places and markets, including ornamental species courtesies from dealers. Over 280 species encountered, but use selected for 150 well-known and important species herein. The inland fishes in Myanmarese legal meaning to all species occurred in the rivers, including estuarine forms. Up to 300 species were reported an enlisted in Myanmarese waters, but possibly over 50% underestimated, due to limitations of the geographic condition and human resource. Myanmarese inland waters are one of important areas for freshwater fish fauna both diversity and endemicity. The country situated in the intermediate zone of the Indian subcontinent and mainland Southeast Asia then shares taxa of both bio-subregion. All river basins were separated by two great mountainous ranges; Arakan and Tennasserim by means of tectonic activity. Created high affinity of a generic level to both subregions, but very particular at a specific level (so call endemic species). In the near future, if more scientific collaboration and more area accessed, numerous more species may found and reported. The important river basins in Myanmar consists of; the Irrawaddy Sittuang, Salween, Tennasserim and Mekong basins including two important natural lakes: Inle and Indowgi. In this survey, we visit Yangon, Bago, Ba-U-Min, Mandalay and Lake Inle including Shwe Nyaun markets. This handbook also includes some species from the Salween and Tennasserim basin, which obtained from the previous survey of Thai DOF (NIFI) and from aquarium dealer sources.