Assessing the Sustainability of Small-scale Inland Fisheries: a case of the fisheries in Barito River of Indonesia 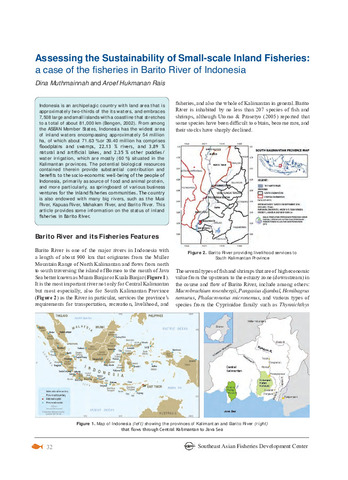 Indonesia is an archipelagic country with land area that is approximately two-thirds of the its waters, and embraces 7,508 large and small islands with a coastline that stretches to a total of about 81,000 km (Bengen, 2002). From among the ASEAN Member States, Indonesia has the widest area of inland waters encompassing approximately 54 million ha, of which about 71.63 % or 39.40 million ha comprises floodplains and swamps, 22.13 % rivers, and 3.89 % natural and artificial lakes, and 2.35 % other puddles/water irrigation, which are mostly (60 %) situated in the Kalimantan provinces. The potential biological resources contained therein provide substantial contribution and benefits to the socio-economic well-being of the people of Indonesia, primarily as source of food and animal protein, and more particularly, as springboard of various business ventures for the inland fisheries communities. The country is also endowed with many big rivers, such as the Musi River, Kapuas River, Mahakam River, and Barito River. This article provides some information on the status of inland fisheries in Barito River.