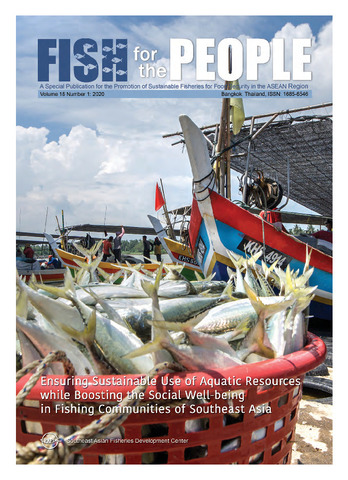 The seven-year technical and financial support provided by the Swedish Government to SEAFDEC facilitated the implementation of the Project “Fisheries and Habitat Management, Climate Change and Social Well-being in Southeast Asia” starting in 2013. Known as the SEAFDECSweden Project, its implementation which reached the final leg in 2019 has the overall objective of achieving sustainable utilization and management of the aquatic resources and reducing vulnerability to climate change by fishing communities in the ASEAN Member States (AMSs). Such goal had been achieved through the Project’s adherence to its three output objectives: Capacity Built for Integration of Fisheries and Habitat Management and Adaptation to Climate Change; Capacity Built and System Improved for the Management of Fishing Capacity (monitoring, record and control); and Capacity Built and Policy Development Process Improved for Drafting and Implementation of Regional and Sub-regional Agreements. Several crosscutting issues had also been addressed, especially those related to gender and labor aspects, local capacity-building, diversifying livelihoods, enhancing the social well-being, and strengthening the cooperation among the Southeast Asian countries. Although the Project embraced four subregions in Southeast Asia, i.e. the Andaman Sea, Gulf of Thailand, Mekong River Basin, and the Sulu-Sulawesi Seas, specific sub-regional focus was given to strengthening of the cooperation around the Gulf of Thailand and Andaman Sea, considering that the other two sub-regions had already been covered by collaborating partners. During the course of its implementation, the SEAFDECSweden Project had successfully concluded several activities with significant achievements, e.g. sustainable management of neritic tunas and other transboundary aquatic resources/stocks, management of fishing capacity and combating IUU fishing, establishment of MCS networks, strengthening gender integration in the fisheries sector, addressing the importance of small-scale fisheries. The Project activities had been planned and carried out with the Ecosystem Approach to Fisheries Management (EAFM) at their backdrops. Furthermore, discussions among the countries concerned were part and parcel of the Project to ensure that several areas of mutual interest were being addressed and fostered through enhanced sub-regional cooperation that were achieved by the frequent bilateral dialogues among the countries in the sub-regions. The experiences obtained and lessons learned from the implementation of the Project had been shared through the various fora as well as through the different issues of this SEAFDEC Special Publication Fish for the People. Moreover, the Project outputs had also been encapsulated into Key Messages to serve as guide for SEAFDEC, the ASEAN, governments of the AMSs, and the Project’s partner organizations in building on the Project results and sustaining its initiatives beyond 2019.

fish for the people