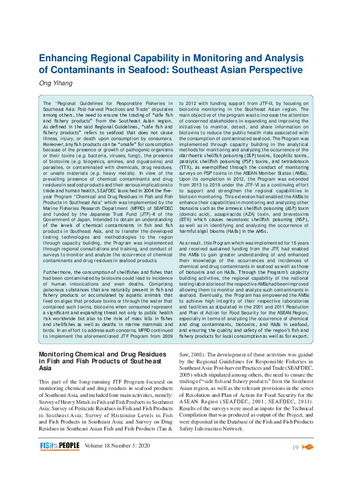 The “Regional Guidelines for Responsible Fisheries in Southeast Asia: Post-harvest Practices and Trade” stipulates among others, the need to ensure the trading of “safe fish and fishery products” from the Southeast Asian region. As defined in the said Regional Guidelines, “safe fish and fishery products” refers to seafood that does not cause illness, injury, or death upon consumption by consumers. Moreover, any fish products can be “unsafe” for consumption because of the presence or growth of pathogenic organisms or their toxins (e.g. bacteria, viruses, fungi), the presence of biotoxins (e.g. biogenics, amines, and ciguatoxins) and parasites, or contaminated with chemicals, drug residues, or unsafe materials (e.g. heavy metals). In view of the prevailing presence of chemical contaminants and drug residues in seafood products and their serious implications to trade and human health, SEAFDEC launched in 2004 the fiveyear Program “Chemical and Drug Residues in Fish and Fish Products in Southeast Asia” which was implemented by the Marine Fisheries Research Department (MFRD) of SEAFDEC and funded by the Japanese Trust Fund (JTF)-II of the Government of Japan. Intended to obtain an understanding of the levels of chemical contaminants in fish and fish products in Southeast Asia, and to transfer the developed testing technologies and methodologies to the region through capacity building, the Program was implemented through regional consultations and training, and conduct of surveys to monitor and analyze the occurrence of chemical contaminants and drug residues in seafood products. Furthermore, the consumption of shellfishes and fishes that had been contaminated by biotoxins could lead to incidence of human intoxications and even deaths. Comprising poisonous substances that are naturally present in fish and fishery products or accumulated by aquatic animals that feed on algae that produce toxins or through the water that contained such toxins, biotoxins when consumed represent a significant and expanding threat not only to public health risk worldwide but also to the risks of mass kills in fishes and shellfishes as well as deaths in marine mammals and birds. In an effort to address such concerns, MFRD continued to implement the aforementioned JTF Program from 2009 to 2012 with funding support from JTF-II, by focusing on biotoxins monitoring in the Southeast Asian region. The main objective of the program was to increase the attention of concerned stakeholders in expanding and improving the initiatives to monitor, detect, and share information on biotoxins to reduce the public health risks associated with the consumption of contaminated seafood. The Program was implemented through capacity building in the analytical methods for monitoring and analyzing the occurrence of the diarrhoetic shellfish poisoning (DSP) toxins, lipophilic toxins, paralytic shellfish poisoning (PSP) toxins, and tetradotoxin (TTX), as exemplified through the conduct of monitoring surveys on PSP toxins in the ASEAN Member States (AMSs). Upon its completion in 2012, the Program was extended from 2013 to 2019 under the JTF-VI as a continuing effort to support and strengthen the regional capabilities in biotoxin monitoring. This extension had enabled the AMSs to enhance their capabilities in monitoring and analyzing other biotoxins such as the amnesic shellfish poisoning (ASP) toxin (domoic acid), azaspiracids (AZA) toxin, and brevetoxins (BTX) which causes neurotoxic shellfish poisoning (NSP), as well as in identifying and analyzing the occurrence of harmful algal blooms (HABs) in the AMSs. As a result, this Program which was implemented for 15 years and received sustained funding from the JTF, had enabled the AMSs to gain greater understanding of and enhanced their knowledge of the occurrences and incidences of chemical and drug contaminants in seafood as well as those of biotoxins and on HABs. Through the Program’s capacity building activities, the regional capability of the national testing laboratories of the respective AMSs had been improved allowing them to monitor and analyze such contaminants in seafood. Eventually, the Program has empowered the AMSs to achieve high integrity of their respective laboratories and facilities as stipulated in the 2001 and 2011 Resolution and Plan of Action for Food Security for the ASEAN Region, especially in terms of analyzing the occurrence of chemical and drug contaminants, biotoxins, and HABs in seafood, and ensuring the quality and safety of the region’s fish and fishery products for local consumption as well as for export.