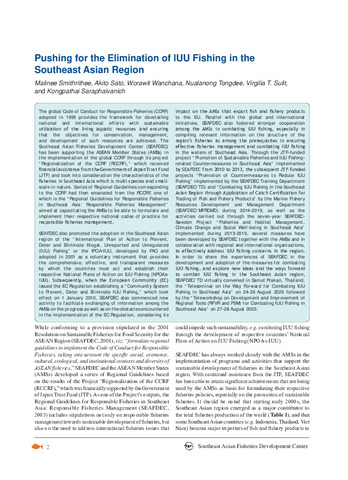 The global Code of Conduct for Responsible Fisheries (CCRF) adopted in 1995 provides the framework for dovetailing national and international efforts with sustainable utilization of the living aquatic resources and ensuring that the objectives for conservation, management, and development of such resources are achieved. The Southeast Asian Fisheries Development Center (SEAFDEC) has been supporting the ASEAN Member States (AMSs) in the implementation of the global CCRF through its project “Regionalization of the CCRF (RCCRF),” which received financial assistance from the Government of Japan Trust Fund (JTF) and took into consideration the characteristics of the fisheries in Southeast Asia which is multi-species and smallscale in nature. Series of Regional Guidelines corresponding to the CCRF had then emanated from the RCCRF, one of which is the “Regional Guidelines for Responsible Fisheries in Southeast Asia: Responsible Fisheries Management” aimed at capacitating the AMSs to be able to formulate and implement their respective national codes of practice for responsible fisheries management. SEAFDEC also promoted the adoption in the Southeast Asian region of the “International Plan of Action to Prevent, Deter and Eliminate Illegal, Unreported and Unregulated (IUU) Fishing” or the IPOA-IUU, developed by FAO and adopted in 2001 as a voluntary instrument that provides the comprehensive, effective, and transparent measures by which the countries must act and establish their respective National Plans of Action on IUU Fishing (NPOAs-IUU). Subsequently, when the European Community (EC) issued the EC Regulation establishing a “Community System to Prevent, Deter and Eliminate IUU Fishing,” which took effect on 1 January 2010, SEAFDEC also commenced new activity to facilitate exchanging of information among the AMSs on the progress as well as on the obstacles encountered in the implementation of the EC Regulation, considering its impact on the AMSs that export fish and fishery products to the EU. Parallel with the global and international initiatives, SEAFDEC also fostered stronger cooperation among the AMSs in combating IUU fishing, especially in compiling relevant information on the structure of the region’s fisheries as among the prerequisites in ensuring effective fisheries management and combating IUU fishing in the waters of Southeast Asia. Through the JTF-funded project “Promotion of Sustainable Fisheries and IUU Fishingrelated Countermeasures in Southeast Asia” implemented by SEAFDEC from 2010 to 2013, the subsequent JTF-funded projects “Promotion of Countermeasures to Reduce IUU Fishing” implemented by the SEAFDEC Training Department (SEAFDEC/TD) and “Combating IUU Fishing in the Southeast Asian Region through Application of Catch Certification for Trading of Fish and Fishery Products” by the Marine Fishery Resources Development and Management Department (SEAFDEC/MFRDMD) during 2014-2019, as well as the activities carried out through the seven-year SEAFDEC-Sweden Project “Fisheries and Habitat Management, Climate Change and Social Well-being in Southeast Asia” implemented during 2013-2019, several measures have been developed by SEAFDEC together with the AMSs and in collaboration with regional and international organizations, to effectively address IUU fishing concerns in the region. In order to share the experiences of SEAFDEC in the development and adoption of the measures for combating IUU fishing, and explore new ideas and the ways forward to combat IUU fishing in the Southeast Asian region, SEAFDEC/TD virtually convened in Samut Prakan, Thailand, the “Teleseminar on the Way Forward for Combating IUU Fishing in Southeast Asia” on 24-26 August 2020 followed by the “Teleworkshop on Development and Improvement of Regional Tools (RFVR and PSM) for Combating IUU Fishing in Southeast Asia” on 27-28 August 2020.