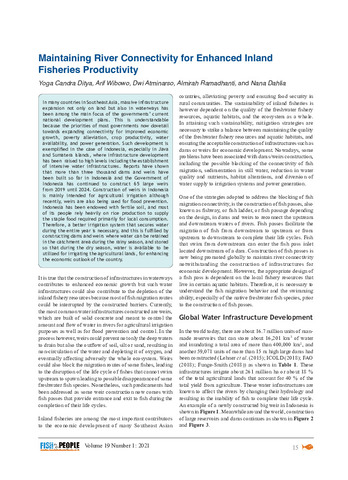 In many countries in Southeast Asia, massive infrastructure expansion not only on land but also in waterways has been among the main focus of the governments’ current national development plans. This is understandable because the priorities of most governments now dovetail towards expanding connectivity for improved economic growth, poverty alleviation, crop productivity, water availability, and power generation. Such development is exemplified in the case of Indonesia, especially in Java and Sumatera Islands, where infrastructure development has been raised to high levels including the establishment of intensive water infrastructures. Reports have shown that more than three thousand dams and weirs have been built so far in Indonesia and the Government of Indonesia has continued to construct 65 large weirs from 2019 until 2024. Construction of weirs in Indonesia is mainly intended for agricultural irrigation although recently, weirs are also being used for flood prevention. Indonesia has been endowed with fertile soil, and most of its people rely heavily on rice production to supply the staple food required primarily for local consumption. Therefore, a better irrigation system that secures water during the entire year is necessary, and this is fulfilled by constructing dams and weirs where water can be retained in the catchment area during the rainy season, and stored so that during the dry season, water is available to be utilized for irrigating the agricultural lands, for enhancing the economic outlook of the country.