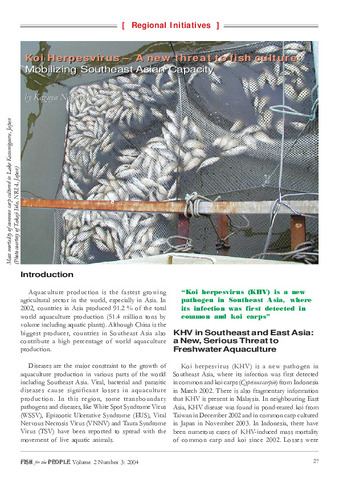 Koi herpesvirus (KHV) is a new pathogen in Southeast Asia, where its infection was first detected in common and koi carps (Cyprinus carpio) from Indonesia in March 2002. Since then, in Indonesia there have been numerous cases of KHV-induced mass mortality of common and koi carp. The former species is an important food resource in the rural areas of Southeast Asia and is abundantly cultured, especially in Indonesia, whereas the latter is internationally traded as an ornamental fish among Southeast Asian countries. Considering its high virulence and devastating impact on both food and ornamental aquaculture sectors, KHV is regarded as a new and very serious threat to carp culture in the region. Details are given of the Regional Fish Disease Project of SEAFDEC, highlighting also the activities of SEAFDEC for KHV disease under this project.