Biosecurity system in Malaysian fisheries: Gearing up for safe and quality seafood 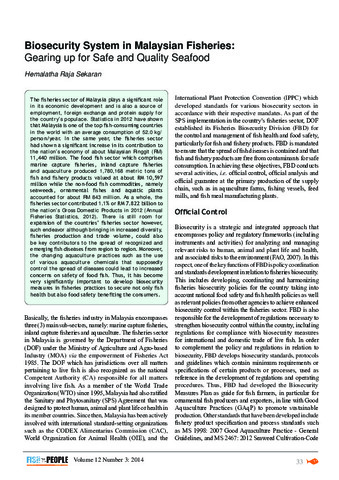 The fisheries sector of Malaysia plays a significant role in its economic development and is also a source of employment, foreign exchange and protein supply for the country's populace. Statistics in 2012 have shown that Malaysia is one of the top fish-consuming countries in the world with an average consumption of 52.0 kg/ person/year. In the same year, the fisheries sector had shown a significant increase in its contribution to the nation's economy of about Malaysian Ringgit (RM) 11,440 million. The food fish sector which comprises marine capture fisheries, inland capture fisheries and aquaculture produced 1,780,168 metric tons of fish and fishery products valued at about RM 10,597 million while the non-food fish commodities, namely seaweeds, ornamental fishes and aquatic plants accounted for about RM 843 million. As a whole, the fisheries sector contributed 1.1% or RM 7.822 billion to the nation's Gross Domestic Products in 2012 (Annual Fisheries Statistics, 2012). There is still room for expansion of the countries' fisheries sector however, such endeavor although bringing in increased diversity, fisheries production and trade volume, could also be key contributors to the spread of recognized and emerging fish diseases from region to region. Moreover, the changing aquaculture practices such as the use of various aquaculture chemicals that supposedly control the spread of diseases could lead to increased concerns on safety of food fish. Thus, it has become very significantly important to develop biosecurity measures in fisheries practices to secure not only fish health but also food safety benefiting the consumers.