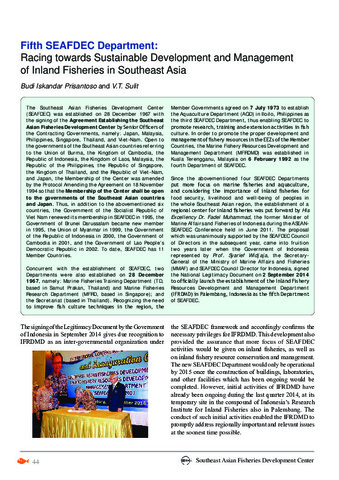 The Southeast Asian Fisheries Development Center (SEAFDEC) was established on 28 December 1967 with the signing of the Agreement Establishing the Southeast Asian Fisheries Development Center by Senior Officers of the Contracting Governments, namely: Japan, Malaysia, Philippines, Singapore, Thailand, and Viet-Nam. Open to the governments of the Southeast Asian countries referring to the Union of Burma, the Kingdom of Cambodia, the Republic of Indonesia, the Kingdom of Laos, Malaysia, the Republic of the Philippines, the Republic of Singapore, the Kingdom of Thailand, and the Republic of Viet-Nam, and Japan, the Membership of the Center was amended by the Protocol Amending the Agreement on 18 November 1994 so that the Membership of the Center shall be open to the governments of the Southeast Asian countries and Japan. Thus, in addition to the abovementioned six countries, the Government of the Socialist Republic of Viet Nam renewed its membership in SEAFDEC in 1995, the Government of Brunei Darussalam became new member in 1995, the Union of Myanmar in 1999, the Government of the Republic of Indonesia in 2000, the Government of Cambodia in 2001, and the Government of Lao People's Democratic Republic in 2002. To date, SEAFDEC has 11 Member Countries. Concurrent with the establishment of SEAFDEC, two Departments were also established on 28 December 1967, namely: Marine Fisheries Training Department (TD, based in Samut Prakan, Thailand) and Marine Fisheries Research Department (MFRD, based in Singapore); and the Secretariat (based in Thailand). Recognizing the need to improve fish culture techniques in the region, the Member Governments agreed on 7 July 1973 to establish the Aquaculture Department (AQD) in Iloilo, Philippines as the third SEAFDEC Department, thus enabling SEAFDEC to promote research, training and extension activities in fish culture. In order to promote the proper development and management of fishery resources in the EEZs of the Member Countries, the Marine Fishery Resources Development and Management Department (MFRDMD) was established in Kuala Terengganu, Malaysia on 6 February 1992 as the fourth Department of SEAFDEC. Since the abovementioned four SEAFDEC Departments put more focus on marine fisheries and aquaculture, and considering the importance of inland fisheries for food security, livelihood and well-being of peoples in the whole Southeast Asian region, the establishment of a regional center for inland fisheries was put forward by His Excellency Dr. Fadel Muhammad, the former Minister of Marine Affairs and Fisheries of Indonesia during the ASEAN SEAFDEC Conference held in June 2011. The proposal which was unanimously supported by the SEAFDEC Council of Directors in the subsequent year, came into fruition two years later when the Government of Indonesia represented by Prof. Syarief Widjaja, the Secretary- General of the Ministry of Marine Affairs and Fisheries (MMAF) and SEAFDEC Council Director for Indonesia, signed the National Legitimacy Document on 2 September 2014 to officially launch the establishment of the Inland Fishery Resources Development and Management Department (IFRDMD) in Palembang, Indonesia as the fifth Department of SEAFDEC.