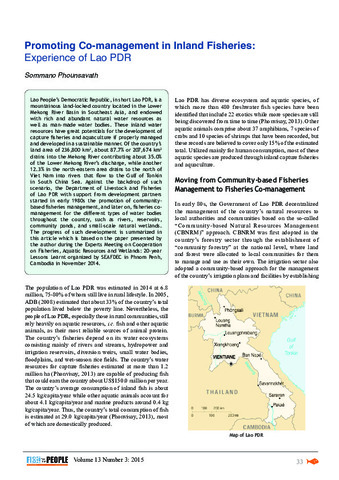 Lao People's Democratic Republic, in short Lao PDR, is a mountainous land-locked country located in the Lower Mekong River Basin in Southeast Asia, and endowed with rich and abundant natural water resources as well as man-made water bodies. These inland water resources have great potentials for the development of capture fisheries and aquaculture if properly managed and developed in a sustainable manner. Of the country's land area of 236,800 km2, about 87.7% or 207,674 km2 drains into the Mekong River contributing about 35.0% of the Lower Mekong River's discharge, while another 12.3% in the north-eastern area drains to the north of Viet Nam into rivers that flow to the Gulf of Tonkin in South China Sea. Against the backdrop of such scenario, the Department of Livestock and Fisheries of Lao PDR with support from development partners started in early 1980s the promotion of communitybased fisheries management, and later on, fisheries comanagement for the different types of water bodies throughout the country, such as rivers, reservoirs, community ponds, and small-scale natural wetlands. The progress of such development is summarized in this article which is based on the paper presented by the author during the Experts Meeting on Cooperation on Fisheries, Aquatic Resources and Wetlands: 20-year Lessons Learnt organized by SEAFDEC in Phnom Penh, Cambodia in November 2014.