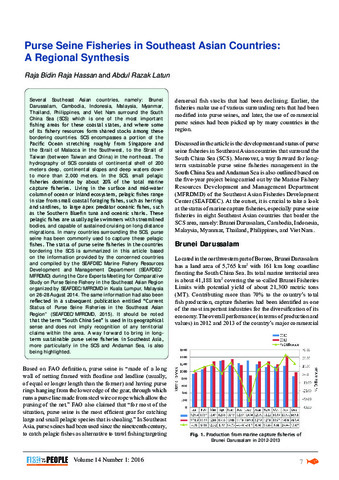 Several Southeast Asian countries, namely: Brunei Darussalam, Cambodia, Indonesia, Malaysia, Myanmar, Thailand, Philippines, and Viet Nam surround the South China Sea (SCS) which is one of the most important fishing areas for these coastal states, and where some of its fishery resources form shared stocks among these bordering countries. SCS encompasses a portion of the Pacific Ocean stretching roughly from Singapore and the Strait of Malacca in the Southwest, to the Strait of Taiwan (between Taiwan and China) in the northeast. The hydrography of SCS consists of continental shelf of 200 meters deep, continental slopes and deep waters down to more than 2,000 meters. In the SCS, small pelagic fisheries dominate by about 20% of the total marine capture fisheries. Living in the surface and mid-water column of ocean or inland ecosystem, pelagic fishes range in size from small coastal foraging fishes, such as herrings and sardines, to large apex predator oceanic fishes, such as the Southern Bluefin tuna and oceanic sharks. These pelagic fishes are usually agile swimmers with streamlined bodies, and capable of sustained cruising on long distance migrations. In many countries surrounding the SCS, purse seine has been commonly used to capture these pelagic fishes. The status of purse seine fisheries in the countries bordering the SCS is summarized in this article based on the information provided by the concerned countries and compiled by the SEAFDEC Marine Fishery Resources Development and Management Department (SEAFDEC/MFRDMD) during the Core Experts Meeting for Comparative Study on Purse Seine Fishery in the Southeast Asian Region organized by SEAFDEC/MFRDMD in Kuala Lumpur, Malaysia on 26-28 August 2014. The same information had also been reflected in a subsequent publication entitled 'Current Status of Purse Seine Fisheries in the Southeast Asian Region' (SEAFDEC/MFRDMD, 2015). It should be noted that the term 'South China Sea' is used in its geographical sense and does not imply recognition of any territorial claims within the area. A way forward to bring in long term sustainable purse seine fisheries in Southeast Asia, more particularly in the SCS and Andaman Sea, is also being highlighted.