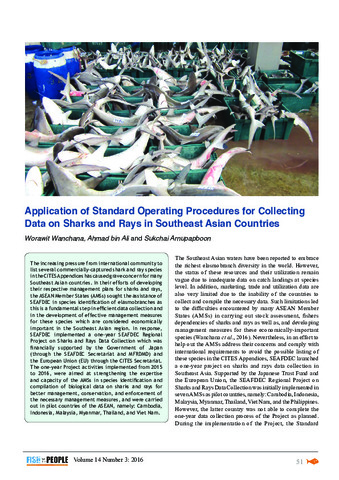 The increasing pressure from international community to list several commercially-captured shark and ray species in the CITES Appendices has caused grave concern for many Southeast Asian countries. In their efforts of developing their respective management plans for sharks and rays, the ASEAN Member States (AMSs) sought the assistance of SEAFDEC in species identification of elasmobranches as this is a fundamental step in efficient data collection and in the development of effective management measures for these species which are considered economically important in the Southeast Asian region. In response, SEAFDEC implemented a one-year SEAFDEC Regional Project on Sharks and Rays Data Collection which was financially supported by the Government of Japan (through the SEAFDEC Secretariat and MFRDMD) and the European Union (EU) through the CITES Secretariat. The one-year Project activities implemented from 2015 to 2016, were aimed at strengthening the expertise and capacity of the AMSs in species identification and compilation of biological data on sharks and rays for better management, conservation, and enforcement of the necessary management measures, and were carried out in pilot countries of the ASEAN, namely: Cambodia, Indonesia, Malaysia, Myanmar, Thailand, and Viet Nam.