Transforming fisheries development of Southeast Asia: SEAFDEC in accord with the UN sustainable development goals 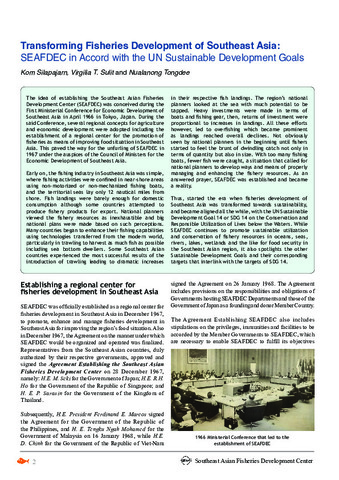 The idea of establishing the Southeast Asian Fisheries Development Center (SEAFDEC) was conceived during the First Ministerial Conference for Economic Development of Southeast Asia in April 1966 in Tokyo, Japan. During the said Conference, several regional concepts for agriculture and economic development were adopted including the establishment of a regional center for the promotion of fisheries as means of improving food situation in Southeast Asia. This paved the way for the unfurling of SEAFDEC in 1967 under the auspices of the Council of Ministers for the Economic Development of Southeast Asia. Early on, the fishing industry in Southeast Asia was simple, where fishing activities were confined in near-shore areas using non-motorized or non-mechanized fishing boats, and the territorial seas lay only 12 nautical miles from shore. Fish landings were barely enough for domestic consumption although some countries attempted to produce fishery products for export. National planners viewed the fishery resources as inexhaustible and big national plans were made based on such perceptions. Many countries began to enhance their fishing capabilities using technologies transferred from the modern world, particularly in trawling to harvest as much fish as possible including sea bottom dwellers. Some Southeast Asian countries experienced the most successful results of the introduction of trawling leading to dramatic increases in their respective fish landings. The region’s national planners looked at the sea with much potential to be tapped. Heavy investments were made in terms of boats and fishing gear, then, returns of investment were proportional to increases in landings. All these efforts however, led to overfishing which became prominent as landings reached overall declines. Not obviously seen by national planners in the beginning until fishers started to feel the brunt of dwindling catch not only in terms of quantity but also in size. With too many fishing boats, fewer fish were caught, a situation that called for national planners to develop ways and means of properly managing and enhancing the fishery resources. As an answered prayer, SEAFDEC was established and became a reality. Thus, started the era when fisheries development of Southeast Asia was transformed towards sustainability, and became aligned all the while, with the UN Sustainable Development Goal 14 or SDG 14 on the Conservation and Responsible Utilization of Lives below the Waters. While SEAFDEC continues to promote sustainable utilization and conservation of fishery resources in oceans, seas, rivers, lakes, wetlands and the like for food security in the Southeast Asian region, it also spotlights the other Sustainable Development Goals and their corresponding targets that interlink with the targets of SDG 14.