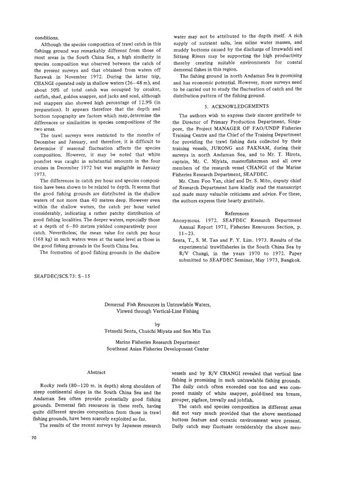 Rocky reefs (80-120 m. in depth) along shoulders of steep continental slope in the South China Sea and the Andaman Sea often provide potentially good fishing grounds. Demersal fish resources in these reefs, having quite different species composition from those in trawl fishing grounds, have been scarcely exploited so far.The results of the recent surveys by Japanese research vessels and by R/V CHANGI revealed that vertical line fishing is promising in such untrawlable fishing grounds. The daily catch often exceeded one ton and was composed mainly of white snapper, gold-lined sea bream, grouper, pigface, trevally and jobfish.The catch and species composition in different areas did not vary much provided that the above mentioned bottom feature and oceanic environment were present. Daily catch may fluctuate considerably the above mentioned bottom features but tends to be equally poor during the period around the 4th day of a lunar month.While the relatively inexpensive fishing gear and equipment for vertical line fishing are important, the skill of skipper and crew in searching for fish schools and in the manoeuvring of vessel and gears will affect the catch.