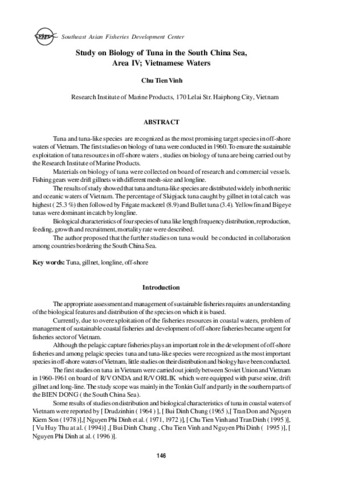 Tuna and tuna-like species are recognized as the most promising target species in off-shore waters of Vietnam. The first studies on biology of tuna were conducted in 1960. To ensure the sustainable exploitation of tuna resources in off-shore waters , studies on biology of tuna are being carried out by the Research Institute of Marine Products.Materials on biology of tuna were collected on board of research and commercial vessels. Fishing gears were drift gillnets with different mesh-size and longline.The results of study showed that tuna and tuna-like species are distributed widely in both neritic and oceanic waters of Vietnam. The percentage of Skipjack tuna caught by gillnet in total catch was highest ( 25.3 %) then followed by Frigate mackerel (8.9) and Bullet tuna (3.4). Yellowfin and Bigeye tunas were dominant in catch by longline.Biological characteristics of four species of tuna like length frequency distribution, reproduction, feeding, growth and recruitment, mortality rate were described.The author proposed that the further studies on tuna would be conducted in collaboration among countries bordering the South China Sea.