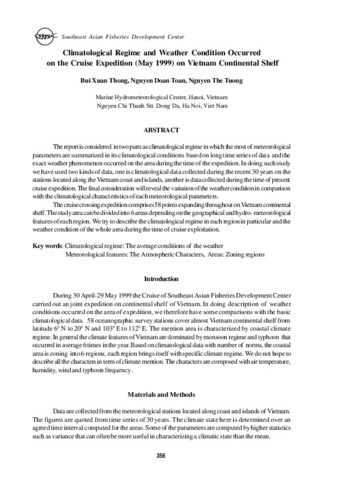 The report is considered in two parts as climatological regime in which the most of meteorological parameters are summarized in its climatological conditions based on long time series of data and the exact weather phenomenon occurred on the area during the time of the expedition. In doing such study we have used two kinds of data, one is climatological data collected during the recent 30 years on the stations located along the Vietnam coast and islands, another is data collected during the time of present cruise expedition. The final consideration will reveal the variation of the weather condition in comparison with the climatological characteristics of each meteorological parameters.The cruise crossing expedition comprises 58 points expanding throughout on Vietnam continental shelf. The study area can be divided into 6 areas depending on the geographical and hydro- meteorological features of each region. We try to describe the climatological regime in each region in particular and the weather condition of the whole area during the time of cruise exploitation.