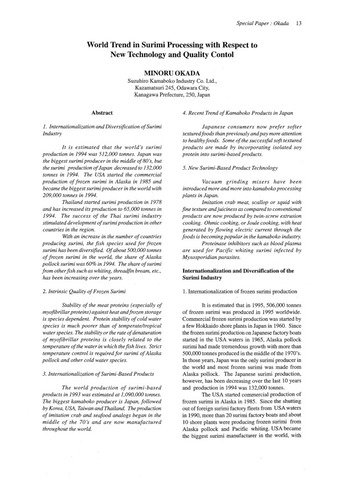 1. Internationalization and Diversification of Surimi IndustryIt is estimated that the world s surimi production in 1994 was 512,000 tonnes. Japan was the biggest surimi producer in the middle of 80 s, but the surimi production of Japan decreased to 132,000 tonnes in 1994. The USA started the commercial production of frozen surimi in Alaska in 1985 and became the biggest surimi producer in the world with 209,000 tonnes in 1994.Thailand started surimi production in 1978 and has increased its production to 65,000 tonnes in 1994. The success of the Thai surimi industry stimulated development of surimi production in other countries in the region.With an increase in the number of countries producing surimi, the fish species used for frozen surimi has been diversified. Of about 500,000 tonnes of frozen surimi in the world, the share of Alaska pollock surimi was 60% in 1994. The share of surimi from other fish such as whiting, threadfin bream, etc., has been increasing over the years.2. Intrinsic Quality of Frozen SurimiStability of the meat proteins (especially of myofibrillar proteins) against heat and frozen storage is species dependent. Protein stability of cold water species is much poorer than of temperate/tropical water species. The stability or the rate of denaturation of myofibrillar proteins is closely related to the temperature of the water in which the fish lives. Strict temperature control is required for surimi of Alaska pollock and other cold water species.3. Internationalization of Surimi-Based ProductsThe world production of surimi-based products in 1993 was estimated at 1,090,000 tonnes. The biggest kamaboko producer is Japan, followed by Korea, USA, Taiwan and Thailand. The production of imitation crab and seafood analogs began in the middle of the 70 s and are now manufactured throughout the world.4. Recent Trend of Kamaboko Products in JapanJapanese consumers now prefer softer textured foods than previously and pay more attention to healthy foods. Some of the successful soft textured products are made by incorporating isolated soy protein into surimi-based products.5. New Surimi-Based Product TechnologyVacuum grinding mixers have been introduced more and more into kamaboko processing plants in Japan.Imitation crab meat, scallop or squid with fine texture and juiciness as compared to conventional products are now produced by twin-screw extrusion cooking. Ohmic cooking, or Joule cooking, with heat generated by flowing electric current through the foods is becoming popular in the kamaboko industry.Proteinase inhibitors such as blood plasma are used for Pacific whiting surimi infected by Myxosporidian parasites.