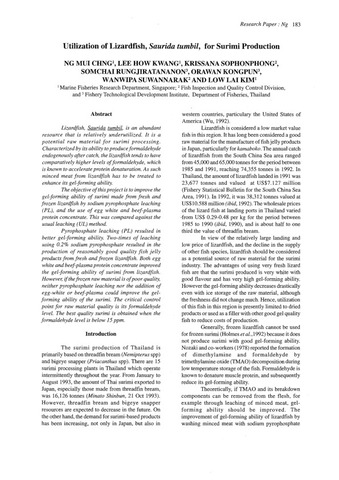 Lizardfish, Saurida tumbil, is an abundant resource that is relatively underutilized. It is a potential raw material for surimi processing. Characterized by its ability to produce formaldehyde endogenously after catch, the lizardfish tends to have comparatively higher levels of formaldehyde, which is known to accelerate protein denaturation. As such minced meat from lizardfish has to be treated to enhance its gel-forming ability.The objective of this project is to improve the gel-forming ability of surimi made from fresh and frozen lizardfish by sodium pyrophosphate leaching (PL), and the use of egg white and beef-plasma protein concentrate. This was compared against the usual leaching (UL) method.Pyrophosphate leaching (PL) resulted in better gel-forming ability. Two-times of leaching using 0.2% sodium pyrophosphate resulted in the production of reasonably good quality fish jelly products from fresh and frozen lizardfish. Both egg white and beef-plasma protein concentrate improved the gel-forming ability of surimi from lizardfish. However, if the frozen raw material is of poor quality, neither pyrophosphate leaching nor the addition of egg-white or beef-plasma could improve the gel-forming ability of the surimi. The critical control point for raw material quality is its formaldehyde level. The best quality surimi is obtained when the formaldehyde level is below 15 ppm.