Lihat Penerbitan
JavaScript is disabled for your browser. Some features of this site may not work without it.

Save our eels: Protection or extinction? 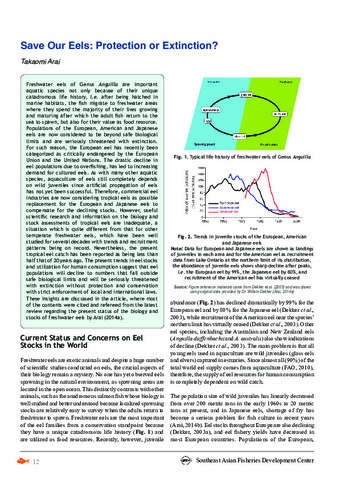 Freshwater eels of Genus Anguilla are important aquatic species not only because of their unique catadromous life history, i.e. after being hatched in marine habitats, the fish migrate to freshwater areas where they spend the majority of their lives growing and maturing after which the adult fish return to the sea to spawn, but also for their value as food resource. Populations of the European, American and Japanese eels are now considered to be beyond safe biological limits and are seriously threatened with extinction. For such reason, the European eel has recently been categorized as critically endangered by the European Union and the United Nations. The drastic decline in eel populations due to overfishing, has led to increasing demand for cultured eels. As with many other aquatic species, aquaculture of eels still completely depends on wild juveniles since artificial propagation of eels has not yet been successful. Therefore, commercial eel industries are now considering tropical eels as possible replacement for the European and Japanese eels to compensate for the declining stocks. However, useful scientific research and information on the biology and stock assessments of tropical eels are inadequate, a situation which is quite different from that for other temperate freshwater eels, which have been well studied for several decades with trends and recruitment patterns being on record. Nevertheless, the present tropical eel catch has been reported as being less than half that of 20 years ago. The present trends in eel stocks and utilization for human consumption suggest that eel populations will decline to numbers that fall outside safe biological limits and will be seriously threatened with extinction without protection and conservation with strict enforcement of local and international laws. These insights are discussed in the article, where most of the contents were cited and refereed from the latest review regarding the present status of the biology and stocks of freshwater eels by Arai (2014a).