Digestibility and effective level of meat and bone meal in formulated diet for milkfish, Chanos chanos Forsskal, grown in fresh and seawater 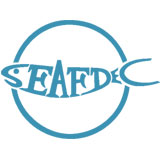 The efficient level of MBM for good growth and survival of milkfish, Chanos chanos Forsskal, without histological changes in tissues (liver, intestine, muscle, kidney and brain) was determined in both freshwater (FW) and seawater (SW) culture conditions. To determine this level, growth and digestibility experiments were conducted in FW and SW together with observations on histology of tissues. In the growth experiments, fish (wet weight less <5g) in triplicate groups were fed for three months with either of the six test diets formulated to be isonitrogenous at 36% with varying dietary levels of MBM at 0%, 7.5%, 15%, 22.5%, 30% and 37.5%. The apparent digestibility coefficients of crude protein and crude fat in diets were determined using a dietary indicator (Chromic Oxide). Intestinal content of fed fish (wet weight, 85g – 65g) were collected by stripping the last posterior third of the intestine. Milkfish survival was 100% in all treatments in FW. Protein of MBM was more digestible to milkfish in SW (93.64%) than in FW (67.34%). Based on growth efficiencies, survival data, and histology of tissues examined, milkfish was able to utilize dietary level of MBM at 30% in FW and at 22.5% in SW. Assimilation of organic matter in test diets that contained MBM at 7.5% to 30% were high (88% - 93%) in both FW and SW.