The application of HACCP in the fish processing industry in Southeast Asia, 2000-2003: Thailand 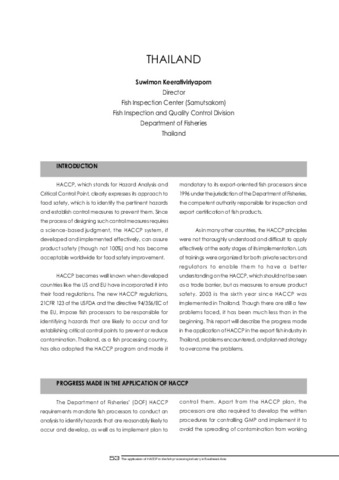 As in many other countries, the HACCP principles were not thoroughly understood and difficult to apply effectively at the early stages of its implementation. Lots of trainings were organized for both private sectors and regulators to enable them to have a better understanding on the HACCP, which should not be seen as a trade barrier, but as measures to ensure product safety. 2003 is the sixth year since HACCP was implemented in Thailand. Though there are still a few problems faced, it has been much less than in the beginning. This report will describe the progress made in the application of HACCP in the export fish industry in Thailand, problems encountered, and planned strategy to overcome the problems. [Extract]